Saint Catherine of Siena: A Model for Us Today 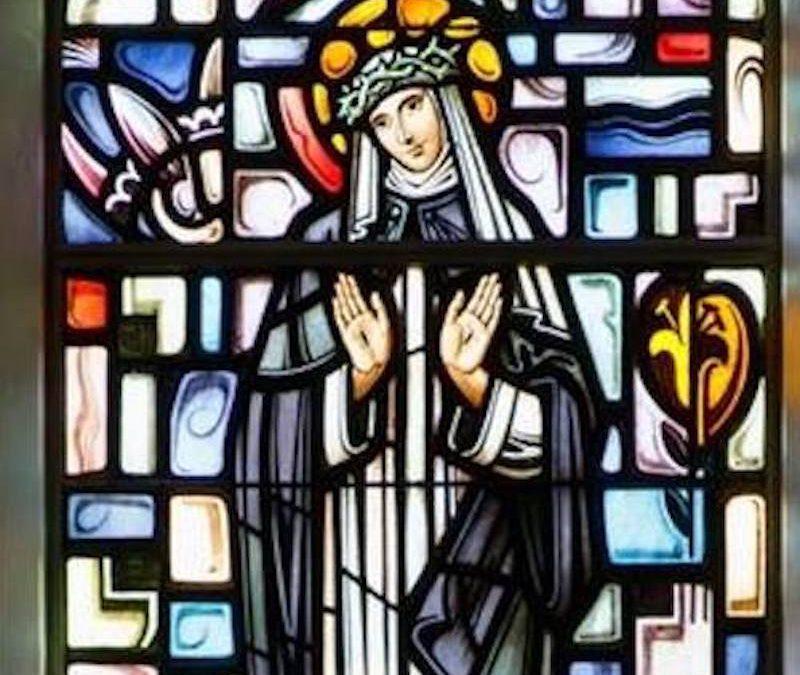 “A soul cannot live without loving.  It must have something to love, for it was created to love.”

Catherine of Siena left behind many profound quotes that have touched the hearts of countless believers and have served to inspire them in their relationship with God.  I chose the above quote as a title for this article because it reflects a key component of Catherine’s own spiritual quest for God.  This quote is found in Chapter 51 of Catherine’s major work entitled The Dialogue.  It is in this work that she shares her conversations with God the Father who offers the Divine perspective on the world, the church, and God’s desires for humanity.  One element of this perspective is the claim that God knows our freedom to love can only be satisfied in God and God is anxious for us to come to this awareness.

Catherine is a fascinating figure in Church history for many reasons…some of which I will discuss in this article.  She was born into a very large family in Siena in 1347.  St. Dominic’s Church in Siena was her introduction to the Order of Preachers and, when she was eighteen, she joined the Dominican Third Order, a lay group affiliated with the Dominicans.  At first, Catherine was fully drawn to the contemplative element of the Dominican way of life but, before long, she found her place in the apostolic/active dimension.  This was very much in keeping with a central tenet of the Dominican vocation…“to contemplate and to give to others the fruits of your contemplation.”

One might wonder how Catherine, who lived centuries before our time, could continue to serve as a role model for us today.  But, when we examine the world into which she was born, we begin to understand her significance for contemporary believers.  A number of aspects of Catherine’s time bear a remarkable similarity to our own and her response to these aspects provide us with an example to follow.   In the 14th century, society in general was undergoing major change and upheaval.  Close to two-thirds of Europe’s population died from the Black Death, the bubonic plague.  This upheaval affected the church as well, which sadly, was tainted with a plague of its own: unthinkable corruption.  St. Dominic, founder of the Dominican Order, lived his entire life in the midst of the church.   He wanted his followers to serve from the heart of the church and to help the church remain faithful to the truth of the gospel.  Clearly Catherine reflected this Dominican heritage.  The corruption of the church during her day caused her great distress.  She loved her church but speaking truth to power was one of her great gifts.  Catherine was passionate for the reform of the church and did not hesitate to challenge the church.   Her courage and passion for the internal reform of the church serve us well today as we too experience a church in crisis.

Despite her lack of formal theological education, Catherine of Siena possessed one of the great theological minds of her time.  Author Elizabeth Dreyer has written that “the history of Christian theology has been largely shaped by men.”  Given this fact, Catherine’s contribution to the field of theology is all the more significant.  However, it should be noted that studying Catherine’s theological contributions can be challenging, for two reasons in particular.  The first is that she was a mystic and mystical experience is difficult to tie down. It has been described as a direct, intimate union with God.  Often, one will see the word ecstasy associated with mystical theology. It is a special grace for which there is evidence in the history of spirituality.  And a study of Catherine’s works does reflect a genuine mysticism.  Another challenge for students of Catherine falls under the category of “hagiography.”  This is biographical writing which tends to idealize the subject.  Sometimes it is difficult to discern what is real from what is embellished by the author.  This is unfortunate because it does a disservice not only to the saint in question but also to those of us who try to emulate this saint, sometimes finding ourselves striving for unrealistic expectations.

Catherine was canonized by Pope Pius II in 1461 and was declared a Doctor of the Church in 1970 by Pope Paul VI.  This title is given to those who have significantly contributed to the Church’s knowledge of the faith.  Among those who have been honored with this title, only four are women and Catherine is the only lay person to have received this title.  She was tireless in her efforts to advance the cause of Christ and his Church.  A model of fidelity, Catherine of Siena returned home to her God on April 29, 1380.

Liked this reflection? Sign up for our St. Catherine of Siena reflection series: