4 Practices of Saint Thomas Aquinas that Influence Us Today 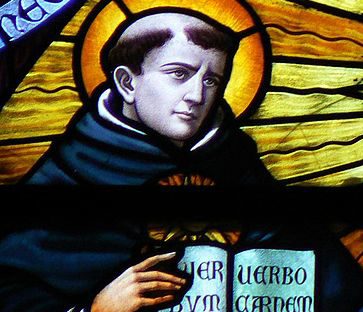 Saint Thomas Aquinas was a renowned theologian, educator, composer, and philosopher. Thomas Aquinas was born in Italy in 1225 (only four years after Saint Dominic’s death). In 1244, he entered the Dominicans, and, in 1245, he moved to Paris (and later to Naples, Rome, and Cologne) to study, teach, and write.

Written toward the end of his life, Thomas Aquinas’s most noted work is the Summa Theologica, in which he posits five arguments for the existence of God. But, Saint Thomas’s genius is attributed to much more than a single work. He is honored as a Doctor of the Church, and is the patron saint of scholars, schools, and students. Nearly eight-hundred years after his death, his legacy continues to teach much about grappling with truth, learning, and how both are essential to faith.

She’s not alone. Many of our sisters have been deeply influenced by the work of Thomas Aquinas. Below, we share the unique ways Thomas Aquinas’s legacy has a lasting influence today.

1. Focus on the Common Good: We Are All One

“The common good is a good that is one in number and is able to be shared by many without being diminished,” Thomas Aquinas wrote. For Sister Diane Trotta, the emphasis on unity among all steered her to pursue the call to religious community life and mission in the Dominican Order. This called her to nursing, so that she can help heal the human family. But Thomas Aquinas’s influence doesn’t stop there. Additionally, he wrote extensively on medical ethics and philosophical and theological questions. “This has supported me through today in my professional membership on hospital Medical Ethics Consultation teams,” Sister Diane says.

2. Preaching that Individuals are Multifaceted, i.e. the Principle of Totality

Thomas Aquinas states that “all decisions in medical ethics must prioritize the good of the entire person.” In addition to seeing the human family as one whole, Thomas Aquinas stresses the importance of the whole individual: spiritual, physical, emotional, and mental. Health isn’t just about solving one problem or directing one aspect of our lives. Rather, holistic health seeks the good of the whole person.

As career educators, many of our sisters have sought to mimic Thomas Aquinas’s persistent search for truth. Although Thomas Aquinas is remembered as a writer, a thinker (or, in less-flattering accounts, a fat man), he is seldom depicted as a wrestler. Yet, Thomas Aquinas was just that: he wrestled with truths and engaged with them.Thomas Aquinas considered truth, critiqued it, and put pieces together such that something with more truth came out in the end. Whether it’s in relation to our faith beliefs, sacred texts, an academic discipline, the current political scene, or other aspects of our world, we, too, are called to wrestle with truth, to put pieces together, and to arrive at greater truth in the end. As educators, our sisters sought to give their students that same deep desire and goal. In truth, the point of education isn’t about grades or degrees. As Thomas Aquinas reminds us, “Jesus says that He came into the world to ‘testify to the truth,'” Sister Catherine Walsh writes. “Seeking truth requires intense listening; deep compassion and selfless openness. Not easy. But so necessary.”

4. But, Above All, Prayer is Most Important

While Thomas Aquinas became famous for his public writings, his private prayer life shouldn’t be overlooked. While it’s easy for us to love Thomas Aquinas himself, his real talent is that he always points toward Christ. Before he studied, he would ask God to “let a ray of your light penetrate the darkness of my understanding.” His prayer to the Blessed Sacrament, Adorote, Tantum Ergo, show his great love for the Eucharistic Presence. In pointing to Jesus, Dominican Sister of Hope Joseph Marie Levesque, O.P. explains, “his prayers surely explain where he got his wisdom. “

O Blessed Thomas, patron of schools, obtain for us from God an invincible faith, a burning charity, a chaste life, and true knowledge, through Christ our Lord.  Amen.