The Guzman Community on Living Together for Forty Years 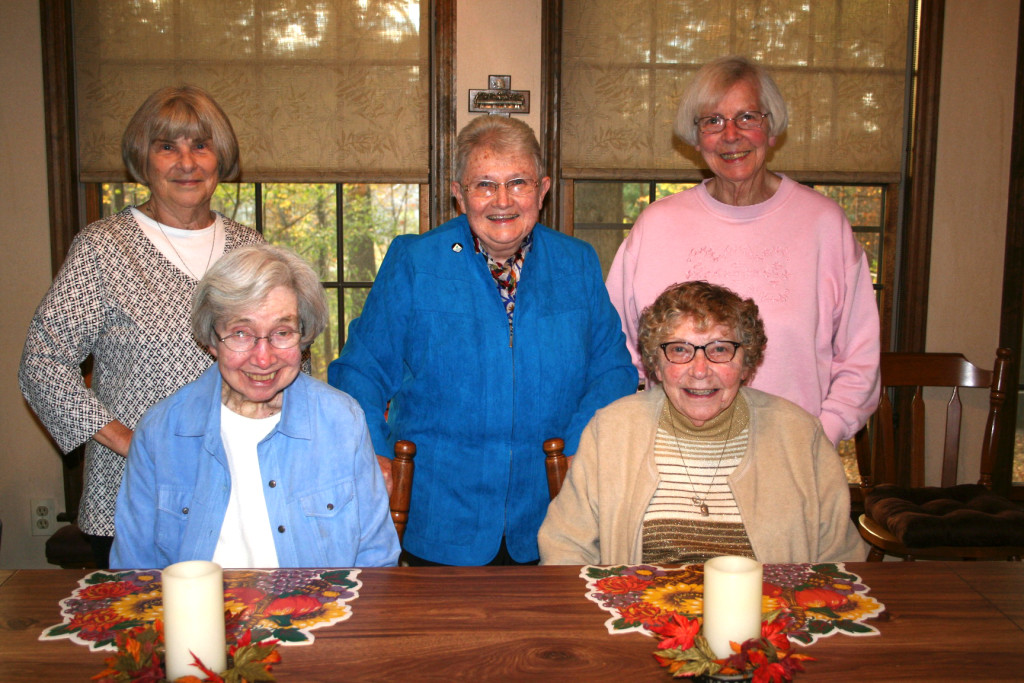 Bonus Audio: Listen in on an excerpt from an afternoon spent with the Guzman Community, or read the full interview below:

What has been the most joyful part of being a sister?

Sister Barbara Hamilton: Should this be holy?

No, it doesn’t have to be holy!

Sister Agnes Boyle: I would say relationships that have developed with each other. And, in many cases, they develop into friendships that last forever.

How did that happen specifically for you?

Sister Agnes Boyle: It happened specifically for me by vow of obedience; we went where we were told to go. Out of that commitment fell these relationships.

A vow of obedience sounds really scary. Was that attractive to you before you entered?

Sister Janice Dionne: I grew up in a large family. In the convent, the chores in the house were called your “obediences.” If you cooked, then your “obedience” was cooking. We just grew up with that. I came from a large family, so I think I was a sister before I entered! We each had our duties; mom didn’t have to do everything. We helped out. Those were our little obediences. When we entered, they called it a vow, but I just thought of it as sharing the duties of the household or the convent, doing what you’re supposed to do.

Sister Francis Irene: You had to be obedient at home, and you had to be good. When you were obedient to something, it wasn’t taking away your freedom, because you’re free to think as you want. No one can take that away from you. It was a gift from God. When you were obedient, you saw that was a freedom. Because, no matter who you were or what they told you to do, you still had a choice about whether or not to do it. Obedience didn’t take away your freedom, but it helped you to be a better person, to grow. It meant that you were being taught, sort of like you were at school, to know the right way to do something and to do it.

Sister Agnes was saying that fruits came out of that.

When we entered, the spirituality was perfection. That’s what your goal was: perfection. But, since Vatican II, God’s life and God’s gifts and God’s joy came out of all of those relationships. So, to answer your question about whether it’s hard to be obedient: if you lived through it, you wouldn’t think it’s hard.

Sister Barbara Hamilton: I think joy is peace, too. You have happy times and exciting times, but joy was the peacefulness underneath. Somebody described it like the ocean: you go down and it gets all riled up and everything, but, when you go down, it’s really deep. I think this is what we feel when we live in community: that peacefulness deep down inside, deeper feelings. Going deeper into your relationship with your God and deeper into relationships with one another. And deeper relationships of who you are. You can have turmoil, you can have fear, but that joy is the peacefulness. Sometimes it comes at prayer time. 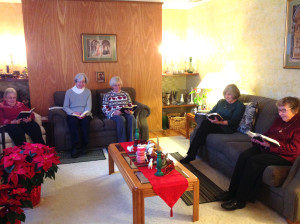 The Guzman Community in their home chapel

Sometimes it comes when we’re in community and we’re sharing in a group. I think the joy is there; it’s part of us. It’s a gift that we have. We have the luxury of peace: built-in retreat time, built-in vacation time. It’s a luxury, but it’s a gift. You get out of your world. We’ve been very blessed as a community. I’m sograteful to God that we’ve touched this peace and that we’ve gotten together.

I just think our world today is instant! Never in our lifetime have we had such instant communication. Instant communication is just too much, being bombarded with it. You have to turn off that stuff. Sit down and talk to yourself. Touch base with your inner self. I don’t think sometimes you have that opportunity. Is it available? That’s what we should be doing.

I think we’re a sign of contradiction, maybe. Here, you can sit down and have meaningful interests, and it doesn’t have to be all crazy.

What are secrets of success for living together for all of this time?

Sister Catherine Walsh: I think it’s the understanding that each one of us has gifts and each one of us is a flawed and fragile human being. We just try to be understanding of each other. They’re such good women. Agnes Boyle is one of the most brilliant women I’ve ever met, and Barbara Hamilton the most generous. And Francis Irene, she’s like Mother Theresa! Really, she prays for everybody and she reaches out to everybody. Janice Dionne is so generous with the sisters and very caring about the sisters in the infirmary. Janice reaches out to people, she does sewing for people (she’s a fabulous seamstress). Sometimes, at the dinner table, it’s not that people don’t cut each other off. But we never rarely have a fight. There’s always forgiveness afterward. It’s the human condition.

They’re good folks. And they put up with me!

You know, I’m writing a book. My book is going to be called Six Nuns, Two Dogs, or No Better Life than Life in a Convent. I’m going to tell the stories about community living that are the funny stories. Like when our car broke down in Seaside Park and we had no gas and no checks, and the teenage gas station attendant drove all six of us home in his Mustang.

We’re also nuns raising a dog, Maggie. At one point, we had an elimination chart of when the dog peed, etc. Sister Barbara Hamilton made an elimination chart. We all had to write down what the dog did and when she did it. We’ve been living together since 1970, and I’m not tired of them. But they might be tired of me; I’m not sure!

Sister Agnes Boyle: Pure grace. Someone had asked me prior how we’ve lived happily together for all of these years, and that was my response: pure grace.

Sister Francis Irene: We have to stick together! When one of us forgets something, another remembers it. We also have a lot of laughs.

Sister Barbara Hamilton: Our prayer holds us together. Praying together is so important. And we pray for our families and our community.

Sister Agnes Boyle: And our families are very good to us. We have very good benefactors and very good families.

Sister Barbara Hamilton: We came together in 1970 with a similar sense of mission, of prayer life, of community. But I think Janice said it earlier: love. We love one another.